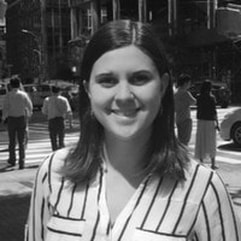 Ms. Coghlan has always had a love for storytelling, in all its forms. After getting her BA in Film/Television Production & Marketing, Ms. Coghlan began her career working as a promotions coordinator at Nickelodeon, aiding in the launch of new shows and movies appealing to multiple demographics across the Nickelodeon ecosystem. After year after working in linear television, Ms. Coghlan was presented with the opportunity to manage the creation of “Play Along Videos” in the Nick Jr subscription-based app, Noggin.

Ms. Coghlan helped build and oversaw the original team that transformed achieved “Moose and Zee” episodes into interactive stories that children ages 2-4 could explore. After this project launched, Ms. Coghlan was inspired to continue to work with emerging technologies, which lead her to the experimental Augmented and Virtual Reality company The Glimpse Group. Since 2016 Katelyn has helped grow the Glimpse brand, along with Glimpse subsidiary brands, while also managing the branding and advertising subsidiary that has successfully launched AR campaigns with brands like Adweek and Colgate, been featured at industry events such as Forbes’ Content Summit and UCLA’s Pulse Conference, and begun establishing partnerships with various creative agencies in New York City.